How Slack is Driving Growth with Pricing 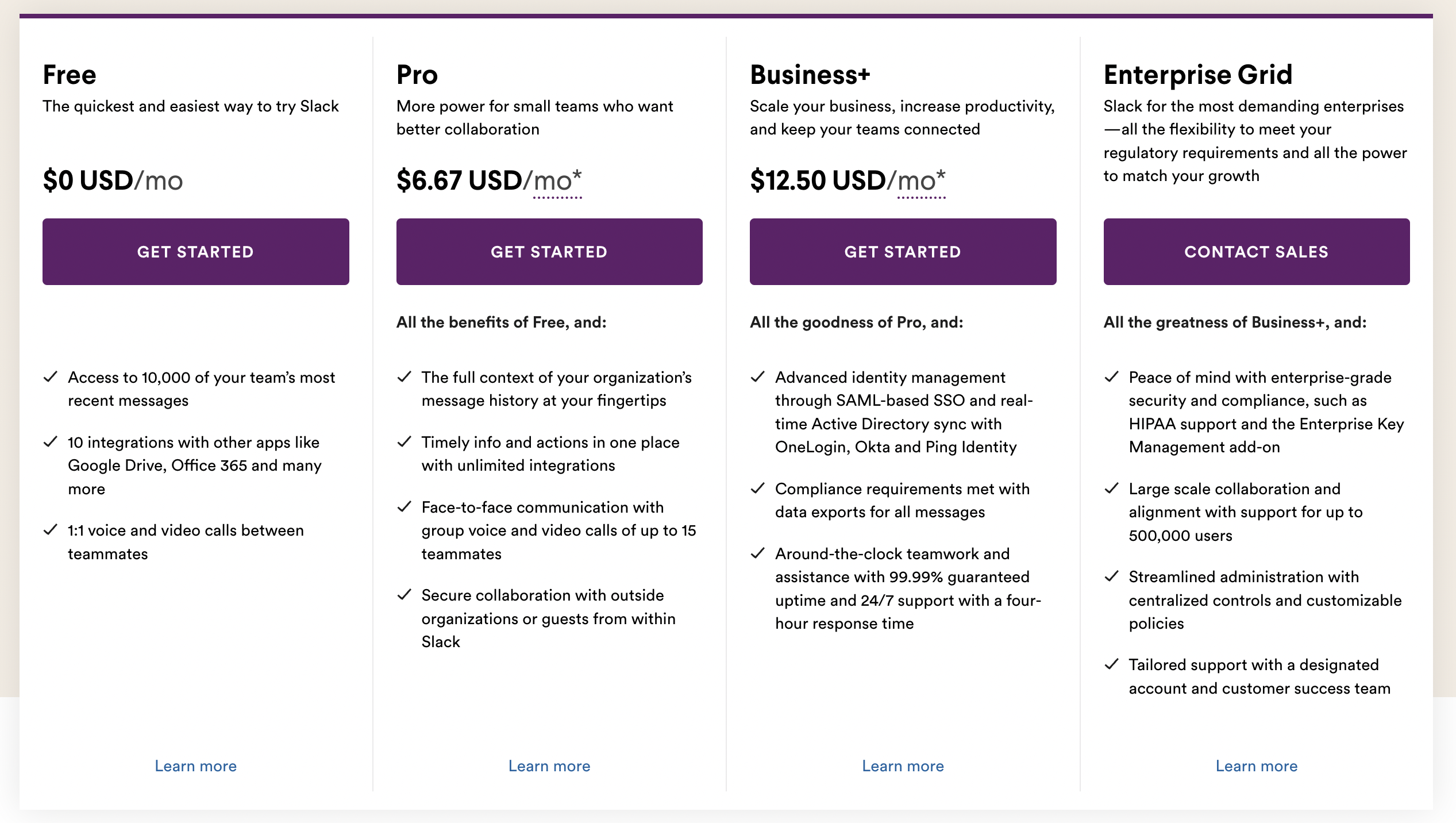 Last month, Slack announced it’s first price increase since launching in 2014, but the price increase is just the beginning of the story. Below, we analyze the changes alongside Slack’s last 10K and annual report prior to its acquisition, and we dig into the implications for SaaS companies looking to follow in Slack’s footsteps.

A Brief History of Slack’s Pricing

Slack’s pricing model is relatively well-known among SaaS nerds (🙋) because it was an early pioneer of active seat pricing through its Fair Billing Policy. Through this policy, Slack’s customers are only charged for actively used seats in the product, and unused seats are refunded, unlike traditional per-seat models that charge regardless of use.

Slack’s usage-based pricing model was a disruptive and novel idea when it was first announced, and helped the company quickly scale. After all, Slack was competing for adoption alongside traditional email and work messaging tools, but this monetization model accelerated adoption by reducing customer apprehension to pay for another work communication tool. In other words, Slack’s pricing model forced it to prove its value through adoption. While per-seat pricing is still common today, the movement toward usage-based models has taken off among SaaS companies thanks to Slack’s success.

Slack has made three major changes:

1. Giving ~80% of its customers more value for free to deepen engagement in the product.

2. Changing its core feature limit to a clear and predictable monetization moment for target customers.

3. Increasing prices on new Pro customers while offering a discount for legacy customers who upgrade to annual contracts.

Here are those changes in more detail:

Giving More Features to Free Customers: Over the last few years, Slack released Huddles and Clips to give its paid customers better video and audio work communication tools within the platform. As remote and hybrid work took off during the pandemic, Slack (now a Salesforce company) made a strategic decision to compete for more workplace communication mindshare.

According to Slack’s 2021 annual report, Slack stated, “On a typical workday… Paid Customers averaged more than ten hours connected to Slack through at least one device and spent more than 110 minutes actively using Slack.” Putting aside feelings about “too much Slack,” that’s mind blowing 🤯.

By shifting Clips and Huddles into its free plan, Slack will encourage free customers — about 80% of Slack’s total customers — to use audio and video alongside its text and channel-based communication. Teaching free customers to use Clips and Huddles is a strategic decision to deepen free engagement in Slack. Slack has the data on the engagement tipping point at which free users begin converting to paying customers (ex: 110 minutes of actively using Slack each day), and shifting Clips and Huddles into the free plan will play an important role in reaching those engagement numbers. By capturing some of the engagement with the likes from Zoom and Google Meet, Slack will increase it’s perceived value for customers and grow revenue. In the era of Zoom fatigue, why use Zoom when you can jump into a quick Huddle for free?

Swapping Feature Limits: Slack is shifting a core feature limit in its Free plan from 10,000 messages and files (i.e., a usage-based limit) to 90-day message and file history (i.e,. a duration-based limit). Why? Smarter segmentation. Slack has determined through research, experimentation, and analysis that its ideal target customers are more likely to experience the value needed to convert to paying customers using the 90-day limit. Moreover, Salesforce intends to bring Slack further up-market to serve Salesforce’s many existing mid-market and enterprise customers. It’s likely the Slack team saw that larger customers were more likely to blow through the 10,000 message limit too quickly to experience the full value of Slack.

Increasing Prices and Offering Legacy Customer Discounts: Slack released many new features and created tons of new value for users since it launched in 2014, and it is asking customers on the Pro Plan to pay a little more for that value. During an age of 9.1% inflation, a $0.75 increase from $8/mo to $8.75/mo is only a price increase of about 9.3%. That seems more than reasonable — but it’s not the end of the story. Slack told its current Pro customers that they could take advantage of the current price for one more year if they upgrade to the annual plan before September 1st. By encouraging existing paid customers to upgrade to the annual plan, Slack can collect more cash upfront, annualize more of its revenue, and likely increase renewals and net dollar retention (NDR) for those customers in 2023.

What’s the impact (and why now)?

Let’s do some back-of-the-napkin math.

Approximately 20% of Slack’s total customers were paying for the product, split across their Pro, Business+, and Enterprise Plans. It’s likely the majority of users were on the Pro and Business+ plans. Without the exact percentages, let’s make a few assumptions:

After some quick multiplication, Slack could see $12.4M of incremental ARR growth from the price increase alone over the next year.

Now, let’s assume the following regarding the changes to feature limits and gates:

2% conversion may not sound huge, but it’s massive in a product-led growth business. Given these assumptions:

Again, after some quick multiplication, Slack could see a revenue uplift of ~$23M, nearly double the revenue growth from the price increase.

Whether or not these assumptions are accurate (we really have no idea), you can see the potential revenue impacts of seemingly small changes to pricing. Since the vast majority of SaaS businesses are not Slack in terms of conversion or engagement, we suggest you start thinking about and refining pricing early and often.

Some thoughts from Stage

We are power users of Slack here at Stage, but the moral of the story here is not to do what Slack did. Unless you have Slack-like growth, engagement and retention, avoiding improvements to your pricing and monetization model could be catastrophic for your business - especially as you create more value for customers over time. According to data from Reforge, improving monetization results in 8x more revenue growth than improving acquisition and 2x  more revenue growth than improving retention.

Slack is also famous for not building a sales team until it had reached unicorn status multiple times over (ironically to be acquired by a company whose core product is used by sales teams). We would advise against waiting too long to build a sales team for virtually all software businesses - even those that are product-led. We would also advise against waiting to invest in pricing and monetization. What the Slack example illustrates is small changes in pricing can lead to significant revenue growth. This fact suggests that continuous measurement and improvement to pricing models over time can result in compounding and exponential growth. By understanding the relationship between usage, provisioning, and revenue, you create the best opportunity to build your software product the way your customers want to buy and to unlock massive growth through smart segmentation and informed product investment. You can't afford to wait 8 years - start building good habits now.

If you’re interested in capturing all of the value you are creating, you know where to find us.

Get insights from Stage delivered directly to your email inbox.

Product-led growth or PLG, is quickly becoming the gold-standard go-to-market model for hyper-growth SaaS
Thank you! Your submission has been received!
Oops! Something went wrong while submitting the form.